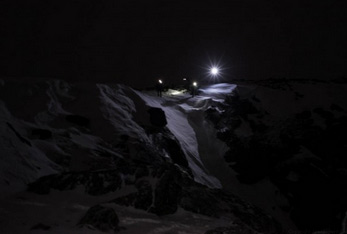 I spend a lot of time on Mount Washington in the winter, either working with the Mount Washington Avalanche Center (USFS), volunteering with Mountain Rescue Service (MRS), skiing, climbing or making photographs. Most people here about the “World’s Worst Weather”, spring skiing in Tuckerman Ravine or some other media hyped aspect of it. What strikes me the most about Mount Washington and the Presidential Range is the unique and vibrant communities that thrive on and around this mountain, In particular the rescue community. Last night I got a call from Chris the director of the avalanche center I work for during the winter, “there’s been a 911 call from a party of climbers stuck in Huntington Ravine, I’m calling the Observatory, Mountain Rescue Service, Jeff and Frank, see you in a little while. ” that was at 8:00pm on a snowy Saturday night. I’m not sure what you typically do on a Saturday night during some heavy snow, but I was hanging out on the couch with my two kids, relaxing. So a myriad of phone calls happen and a bunch of people drop what their doing, pack up their gear, down jackets, heavy gloves and head up to Pinkham Notch to help three people they’ve never met in their lives, strangers. Members or the Mountain Rescue Service, The Mount Washington Observatory, Appalachian Mountain Club and US Forest Service all start commuting towards Huntington Ravine when most are settling in for a cold beer or warm dinner.

A lot of talk and press has been covering the negligence of climbers needing to be rescued, charging anyone that needs a rescue, and many other facets of this complicated fact of life in the mountains. It’s only complicated before and after each rescue. Once a rescue begins there’s one goal to get it done, the goal is simple the process is anything but. That’s where our community shines brighter than any brand new 400 Lumen headlamp. The Mount Washington Observatory crew, Cyrena and Slim were fueling up and preparing their snow cat to shuttle rescuers up the auto road and drop us off at the “Cow Pasture” the closest point to Huntington Ravine. At the same time Dave and Rich, caretakers from Hermit Lake and Harvard Cabin where on the floor of Huntington peering between clouds and snowflakes getting a visual of the party’s location, Mountain Rescue guys sorting gear and preparing to get dropped off high on Mount Washington, and US Forest Service setting up the overall logistics of a 15 person rescue operation in the middle of the night.

I won’t go into the normal weather that rolls over the summit of Mount Washington, but I will say this evening was particular kind, 15 degrees and 30 – 40 mph winds and blowing snow, two inches of which had fallen since the 911 call, a wet 2 inches from the S, turns out is right in your face when in Damnation Gully, the venue for our evenings rescue. The one other thing I will mention is that having a 10 person heated ride on a snow cat to Alpine Garden is far better than slogging up into Huntington Ravine from below. The other part that sticks in everyone’s head throughout the night is that there is a heated refuge on wheels (well tracks really) nearby in case things don’t go according to plan. 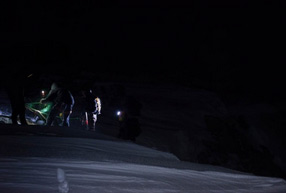 One challenge that can easily get overlooked is trying to locate someone on a cliff face from several hundred feet above in the dark. Working with spotting team on the floor of the ravine directing our movements above, similar to lining up stars in the sky, reduced our time moving back and forth along the snowy slopes that cap each of the gullies. Looking back, this is one of the most exposed parts of the operation. With Jeff, a few MRS members and the caretakers both acting as spotters and a back-up team to provide access from the bottom of the gully if needed all of the pieces where in place to start moving the climbers of of their ledge.

Probably the most critical component of the night was the two man team that rappelled down into Damnation Gully to pull the three stranded climbers out. It’s remarkable to have the decades of real mountain failures, near misses and successes available to the US Forest Service or the NH Fish and Game during any technical rescue like this one. The Mountain Rescue Service volunteers, Mark Synnott and Pete Doucette both having spent tons of time guiding and playing in Huntington Ravine brought that experience as well as tons of technical talent down into Damnation Gully with them. Quickly and efficiently Pete and Mark had the three climbers rigged and ready to start moving up and out of Huntington. By 4AM or so we were in sight of Slim and Cyrena and the warmth of their snow cat.

I covered most of the “glamorous” parts of this night in Huntington. The one part I did leave out is the IC or incident command piece of the puzzle. Chris, after many years working on Mount Washington and directing too many rescues to count he’s the guy that inevitably fills that roll and fills it well. He makes sure that nothing slips through the cracks, incoming weather, increasing avalanche danger, coordinating transportation, or anything that might get forgotten by one of us too focused to see the big picture. He also is the last to leave, dealing with paperwork, phone calls, and the un-fun things that are required at the end of any rescue.

Stepping back a bit from the details, I find it interesting when this many people can come together a the drop of a hat, split up into teams and work so effectively in a pretty challenging arena. Each having their own responsibilities and all counting on each other, all learning a little bit more each time we get together. Including those who got rescued that night, they hopefully learned something from this. I’m sure they went away impressed with the community that we’ve all helped grow each time we’re in the mountains together. 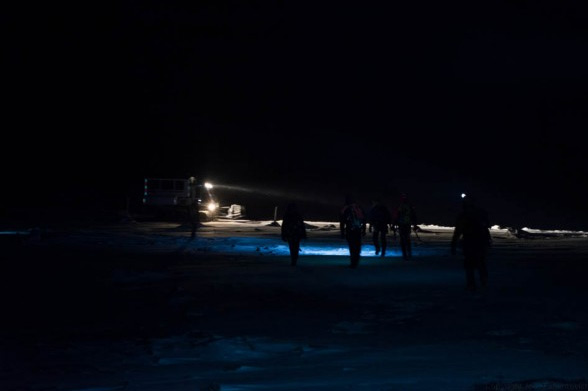 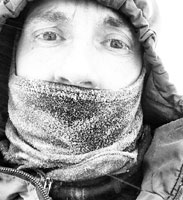 Joe is Vice President of MRS and a member of the climbing team. Professionally, Joe is a Snow Ranger at the Mount Washington Avalanche Center, videographer, photographer, sound engineer, and producer.
Visit his website at http://www.joeklementovich.com/